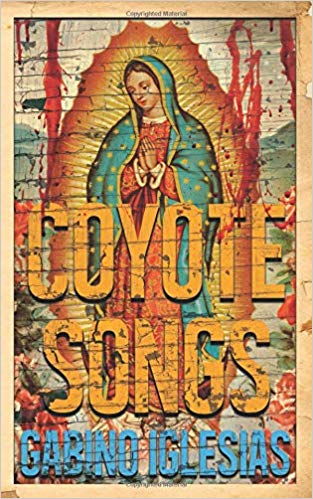 Several weeks ago, I was listening to an episode of the Three Guys With Beards podcast, and one of the guys mentioned he was reading Coyote Songs by Gabino Iglesias.  The praise he gave the book, and the tidbits he mentioned piqued my curiosity, and I proceeded to Amazon to check out the novel.  It didn’t take me long to purchase a copy for my Kindle and throw it in my TBR list.  Two weeks later, I started reading it.  Fast forward a few days.  I’ve finished the story and I feel numb, like I’ve been in one hell of a bar fight and then gotten drunk to dull the subsequent aches and pains.

Coyote Songs is a tale of savage beauty, and Gabino Iglesias’s tight, vibrant language tells the story in a raw, powerful voice.  Here’s an example of his writing from one of many memorable scenes in the book:

The novel follows the lives of several characters, including a boy on a quest for vengeance, a coyote on a mission from the Holy Virgin, a ghost of a murdered woman whose rage floods the land around her, and a performance artist who wants to put on an exhibition that will catapult her into legend.  Their tales slowly intertwine as the novel unfolds, culminating in a violent dance of death in a brutal, mystical version of the Southwest.

This is the first time I’ve read anything by Iglesias, and I look forward to what he’ll deliver in the future.  There are a few characters that I hope will show up again, as the little bits of them we see in Coyote Songs hint at larger stories in the tapestry of their lives.  For instance, there is a priest with some definite darkness in his past that I would like to see in a future story.  Hell, if Mr. Iglesias were to write a novel about that character, I’d buy the book.  Then there is the ‘coyote’, one of the main characters, whose story hints at more to come.

One of my favorite characters in the book is a relatively minor figure, that of a witch to whom the coyote goes for guidance.  The few facts presented to the reader about the witch only serve to whet the appetite for more.  Again, if Gabino Iglesias ever focused a novel on her, I’d be first in line to buy it.

I enjoyed Iglesias’s skill in fleshing out the characters in the story.  Even the story of the performance artist, whom I was not inclined to like the first time she appeared, gradually pulled me in till I was hooked, and I found myself looking forward to the next chapters in her tale as I made my way through the book.

Bottom line, this is a horrifically wonderful book and I highly recommend it.  Be warned, the violence and horror in the tale are graphic and gory, and not for the faint of heart.  Iglesias pulls no punches in his depiction of the savagery and brutality inherent in the landscape of his story.

Now go, find yourself a copy and give it a read.  Here’s a link to it on Amazon.